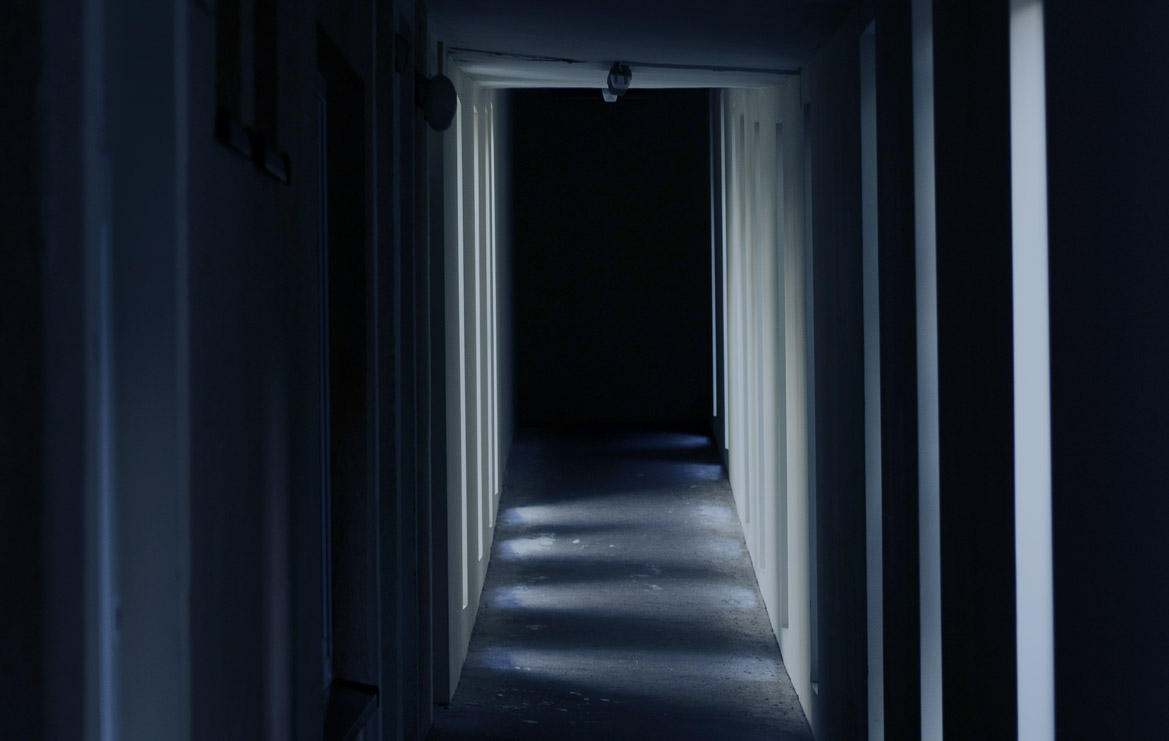 At the sight of the house, he rolled his eyes. It was a classically spooky old place, a once magnificent structure that had fallen hard on disrepair. The paint was flaking away, the windows were dark and dusty, and the yard was criminally overgrown.

“Ghosts,” he groaned, anticipating disappointment. It had been a while since he debunked a haunted house, and the universally dissatisfying results were why. If the drive had not been so long and fatiguing, he might have just turned around. But having come all this way, he soon stood knocking at the door.

There, a corroded gorgon clutched a squeaking ring in its mouth. He could almost imagine that the builder had seen the future state of the house and had chosen such a fixture for it. Its stony gaze was somewhat unnerving, but the menacing face soon swung away with a soft groan. There was no one to meet him, only gloom waited at the threshold.

Stepping inside, he inspected the portal for electric latches or hidden wires but found none. Suspecting the door was weighted to open naturally at a knock, he had no time to test this hypothesis. From deeper inside came the ringing of a small bell. He followed it to his host.

It took all his self-control to keep from reacting to the seated figure. The man must have been a hundred years old. His pale, waxy skin was as wrinkled as sun-baked leather and mottled with liver spots. What remained of his wild, white hair practically screamed lunatic. Though his eyes were glazed and sleepy, he stirred to life as though with the throwing of a switch.
“Mr. Spivey?” came the muddy growl of his voice.
“Yes,” he muttered dumbly before regaining his composure, “…and you must be Mr. Addison. I’d like to thank you for inviting me into your home.”
“I admit,” said the older man with a devilish sparkle in his eye, “that the stories I’ve heard of you have intrigued me. You are the consummate skeptic, or so they tell me, and I am curious why a non-believer would devote so much time and effort to a subject you so strongly disavow.”
“We live in an age of reason.” came the practiced response, and one he hoped carried a sting, “There is no room for backward superstitions, especially when charlatans and con men defraud the populace at large. I confront ignorance, delusions, and lies.”
“I must challenge your reasoning, Mr. Spivey. For if people are so dim and gullible, then it cannot be an age of reason, can it?”
The old man was sharper than he anticipated and he conceded the point with a nod and a slight smile. Before he could gather his wits, his host continued.
“I will agree that most people are too sure of their beliefs, and that most of these beliefs are rubbish. I suspect you are happy to relive people from this… burden. But are you equally prepared to abandon your own convictions?”
“I go where the evidence takes me. If I’m wrong, and this can be demonstrated, I can change my mind.”
“It is not a matter to take lightly. Such evidence would have a profound effect on your mind, on your health, on your very life. If you are happy with your life as it is, perhaps we should call this affair off.”
“I think I can handle it.” he retorted, bristling at the challenge.
“Very good, then. As you have observed indirectly, even the commonplace aspect of the supernatural is harmful and destructive. It is important that I stress that, were supernatural forces to exist, it would be wrong to send someone to meet them unless they were ready.”
“What exactly is your claim, Mr. Addison?”
“I make no claim. Claims are for charlatans, are they not? I merely present an invitation for you to test what you know about reality.”
“That’s an interesting tactic to avoid the burden of proof. So tell me, what is it to be? Ghosts and spirits? Psychic powers? Magic and monsters?”
“It is a curse.”
“A curse? Well, that’s one I haven’t heard in a while. What sort of malign mystic force are we dealing with?”
“That is for you to discover, if you dare. I have warned you, and I deem you to be suited to decide your fate. It is now up to you. Take it or leave it, as they say.”
“What do I have to do?”
The old man lifted a trembling arm to point to a set of double doors.
“Beyond, you will find a hallway. At the far end is a room. Inside there is a mirror. Go and gaze into this mirror and you will be amazed at what you see.”
“That sounds easy enough.”
“Then I hope you will not mind a small indulgence. There is a table beside the mirror where you will find a bell exactly like this one,” he said while shaking its mate. “Ring it when you get there. I will hear it and know that you have met my challenge.”
As he started for the doorway, the old man called out, “There is still time, Mr. Spivey. Admit that you don’t really want to know the truth and walk away.”
“Not on your life. And when I come back, free of this curse, you will admit that you are either deluded or deceptive.”
“So be it. Good luck.”

As the door closed behind him, the hall became an unearthly passage. The blackness of the shadows was broken by patches of light that blazed through doorways on either side. Each step brought the growth of an undeniable dread. The hallway seemed to stretch on forever.
But these fears were puerile, he told himself. They were the tools of bullies who had held back mankind for thousands of years by preying on doubt. As his fear grew, so did his resolve. Even if the room was in Hell itself, he would dare a visit.

The walk felt like it took a thousand years.
His heart was pounding as he reached the room.
Now it was his hand that trembled as he opened the door.
Musty air bellowed forth in a suffocating blast, but he smiled. For beyond neglect and decrepitude, there was little to reward the effort.

Wiping dust from the glass, he stood for a moment, chuckling softly as he shook his head. Then he sighed and picked up the bell. His host heard the ringing and began to smile.
He was not surprised by the sudden screams.

They rose to sharp, piercing shrieks, a sound not unlike tormented agony. As horror took hold, they became the grieving wails of fools and the damned. They collapsed into a tired sobbing before they ceased. Spivey was on the way back now, though the trip took even longer than the first time.

“Damn you!” called the weak and creaking voice of a now very old man, “Damn you to Hell!”
But the chair his host had occupied was empty and near it stood a much younger man.

“The curse is now yours, Mr. Spivey. You will have a chance to break it once every ten years. It took me fifty years to find a replacement, but, then again, I was lucky to find one as perfect as you.”
“You can’t do this to me…”
“I did nothing to you, you did this to yourself. And those are the rules. You may make the offer, but you must dissuade the next one. You must reveal that a curse awaits them. Contemplate this evening and you will see what must be done. Now, if you’ll excuse me, I haven’t left this wretched place in half a century and I’m eager to meet this age of reason.”
“You won’t get away with this! I’ll call the police…”
“Ha! The police? What will you tell them Mr. Spivey? Will you accuse me of magic? That’s quite an extraordinary claim, and you’ll need extraordinary evidence. The burden of proof is on the one who makes the claim, after all, not on the one who doubts it. Good bye and good luck, Mr. Spivey.”